Ground freezing for mine shaft sinking in the United States dates back to 1888 when the technique was first used at the Chapin Mine Co. in Iron Mountain, Missouri. Nowadays, ground freezing is used worldwide for both mining and civil applications. In fact, for deep mines, no better method has yet been established for sinking production shafts through deep, water-bearing ground, and the technique is often specified. This was the case for the construction of a new shaft at Gibson County Coal Company’s facility near Princeton, Indiana.
Expansion of Gibson County Coal’s operations to access additional coal reserves included the sinking of the North Portal No. 2 ventilation shaft, a vertical service shaft 32 feet in excavated diameter and terminating approximately 550 feet below ground surface. However, more than 100 feet of saturated soils, mostly composed of sands lying within the flood plain of the Patoka River, overlie competent coal- bearing rock at a depth of 115 feet. The mine owner specified ground freezing to stabilize the overburden soils during shaft excavation and liner placement.
Piezometer readings taken over a pre-freeze, 40-day period revealed abrupt changes in water levels within the sand aquifer, corresponding to water level fluctuations in the Patoka River, half a mile away. To protect the project from seasonal flooding, the owner specified the construction of a raised work platform and collar to prevent inundation of the shaft during a flood. This work was completed before the ground freezing installation.
Moretrench’s ground freezing design called for approximately 40, 4-inch diameter, steel closed-end freeze pipes, plus a comprehensive array of piezometers and temperature monitors, installed through the overburden soils and extending 15 feet into the underlying sound rock. The pipes were installed from the work platform twelve feet above the original ground surface. The prime supply and return pipelines were located in a gallery built around the shaft collar, and safely above the natural ground surface, which was in fact inundated for a brief period during the formation of the frozen wall.
Each individual freeze pipe was surveyed to verify the verticality and distance from the adjacent pipe to ensure design criteria were achieved. Closure was accomplished approximately 8 weeks after the initiation of ground freezing. The ground freezing program ensured that subsequent excavation through the overburden soils by prime contractor Frontier- Kemper was problem-free. 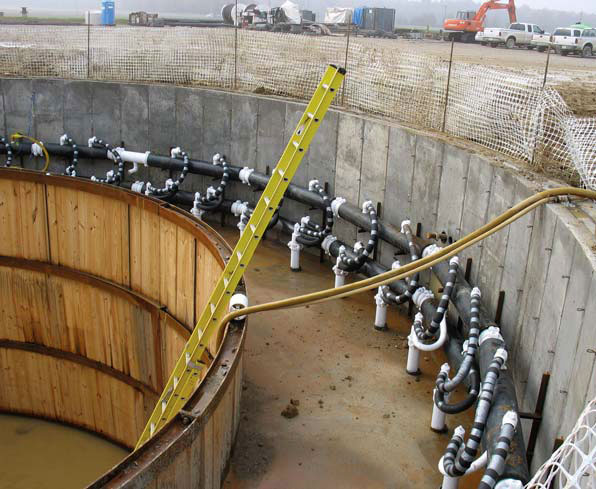 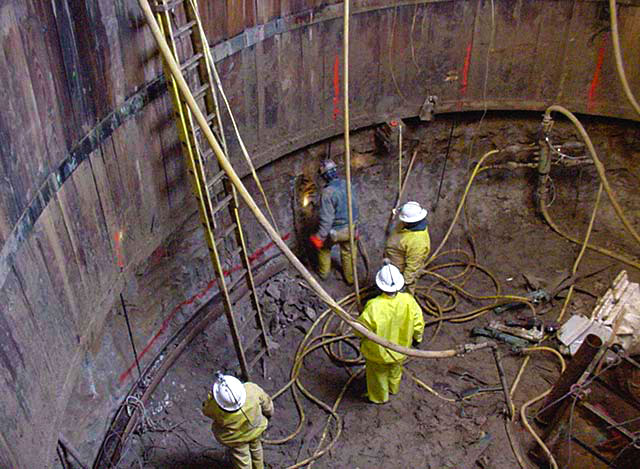 Excavation of shaft through frozen ground 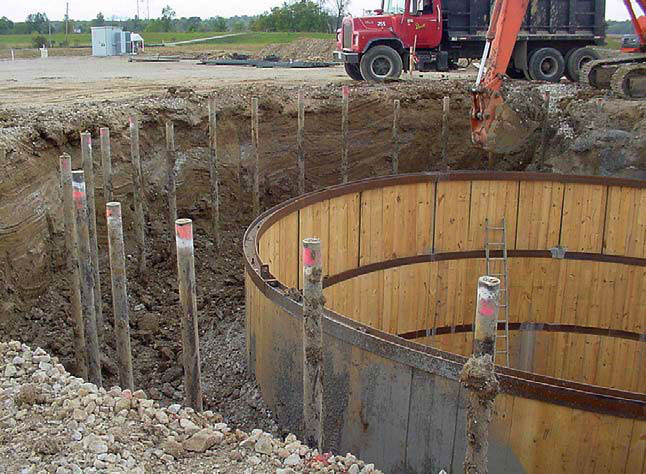 Freeze pipes installed around the perimeter of the shaft