Ground freezing is recognized as the most effective method of providing groundwater cut- off and excavation support for deep shaft sinking. Design and application of the freezing program requires specialized engineering knowledge and experience, and its success is predicated on accurate subsurface information. Moving groundwater and groundwater contamination can inhibit freeze closure. In such an event, accurate and early diagnosis of the condition and timely reaction to mitigate potential project delays is critical. Such was the case for CSO shaft construction at Providence, RI.
The overall project involved the freezing of four shafts excavated by conventional methods, plus an additional two shafts which were raise bored through frozen ground. The conventionally excavated shafts varied from 45 to 34 feet in diameter and were as deep as 175 feet. The raise bored shafts were frozen solid for 12- and 6-feet diameter bores.
While ground freezing for the nearby shafts had been accomplished without incident, closure for the main 45-foot diameter access shaft proved to be particularly challenging due to three unanticipated factors:

When freeze closure was not achieved at the main access shaft within the anticipated six weeks from activation of the system, temperature profiling of the freeze pipes was performed to evaluate the progression of the freeze and to determine why closure had not occurred. Profiling indicated temperature anomalies at shallow depth near the water table almost uniformly around the perimeter of the shaft. Further investigation revealed the presence of free product. Moretrench immediately installed a secondary series of shallow angled freeze pipes, splitting the centers between the original freeze pipes. One week after the activation of the secondary pipes, probing confirmed formation of the freeze at the shallow depths.

Temperature profiling had also indicated slightly warmer spots in the frozen wall between depths of 90 and 125 feet on the north side and 150 and 160 feet on the south side which although warmer were not well defined or readily distinguishable. Additional temperature profiling indicated advancement and progressive growth of the freeze through some of the suspected warm spots, and little progress at other locations. Additional testing was performed to better delineate the locations of the “windows” in the frozen wall, clusters of tube à manchette grout pipes were installed at the north and south sides of the shaft, and approximately 40,000 gallons of cement-bentonite grout was injected outside of the perimeter of the shaft. The grouting closed the windows after 18 weeks of freezing, as observed by a sudden rapid rise in the water level in the center relief well. 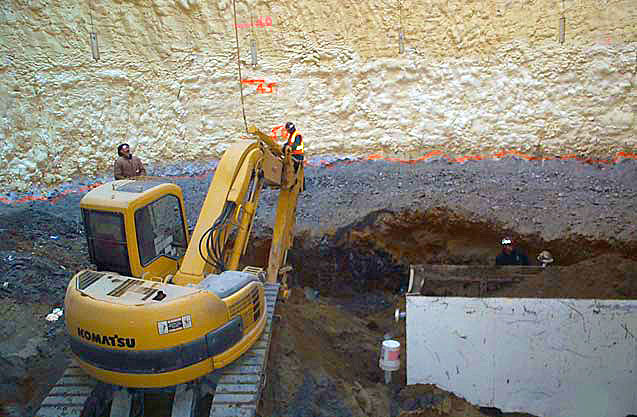 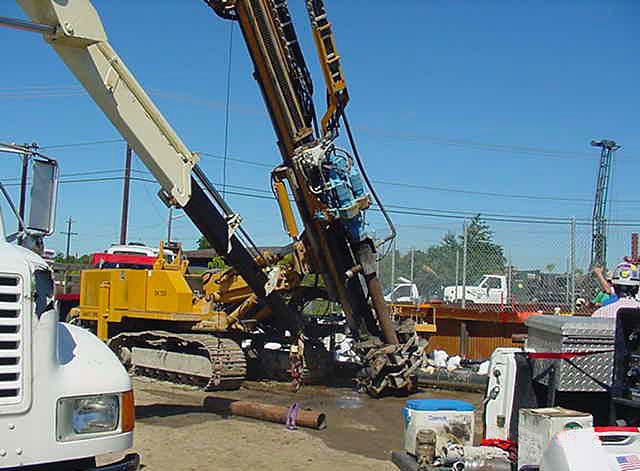