The construction contract for the first phase of the 2nd Avenue expansion was awarded to the S3 Tunnel Constructors, a joint venture of Skanska USA Civil, J. F. Shea Construction and Schiavone Construction. The new stretch of subway extends from 92nd Street south to 63rd Street where it will link up to the existing system. The twin, 22-foot diameter tunnels are being bored primarily in rock using two TBMs.
While the station was being excavated, additional borings and exploration further along the alignment indicated the presence of a mixed-face soil/rock condition and inadequate rock cover above the crown. Ground freezing was selected to provide ground stabilization and water cut-off where a depression in the rock surface elevation was present just south of the 800-foot long launch box for tunnel TBM-2. Ground freezing was selected over other ground stabilization as the more assured method.
A grid of over 100 angled freeze pipes was installed over a distance of approximately 150 feet along the tunnel alignment, with the frozen mass extending approximately 10 feet either side of the tunnel and reaching below the tunnel invert. The most pressing obstacle of this concept was the presence of steel freeze pipes in contact with the cutter heads. While TBMs would typically have no problem mining through an occasionally steel pipe, the presence of several clustered pipes would create problems for the cutter head and TBM machinery. To alleviate this problem, aluminum pipes were substituted in the tunnel face. These pipes were shut off and evacuated prior to the advance of the TBM while the exterior steel pipes remained in operation to maintain the freeze.
Two 500 horsepower mobile refrigeration plants were installed, operated and maintained in the very congested urban residential environment of the upper east side of Manhattan. In addition to the need to redirect traffic due to lane closures, additional safety measures were implemented. The refrigeration units were electrically powered and utilized anhydrous ammonia as the primary refrigerant to chill the calcium chloride brine. Specially designed alarm systems and enhanced operator training were implemented to provide the members of the community peace of mind with regard to safety.
The use of ground freezing permitted uneventful mining operations with the TBM. The mixed face zone was lined with conventional cast-in-place concrete as the TBM passed through the zone. The project was completed on time, within budget and without any adverse heave or settlement to the surrounding structures. 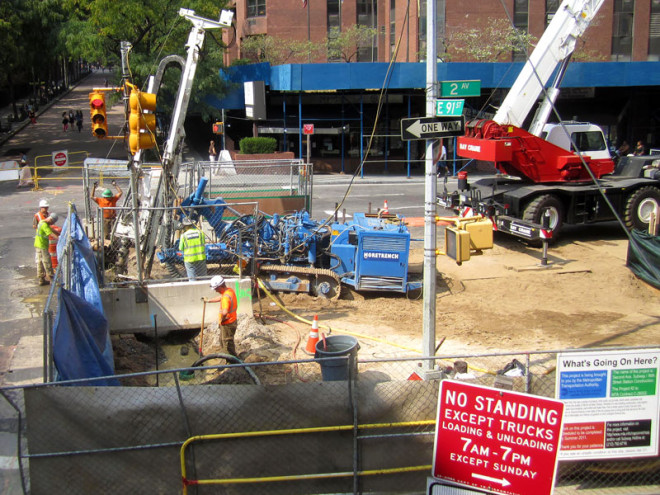 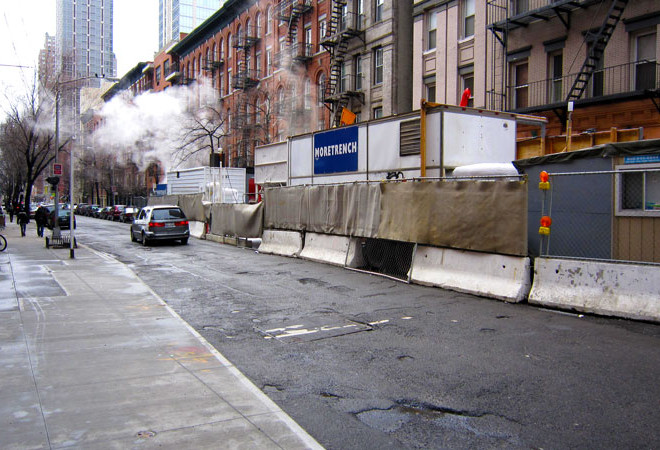