Jacking of three, massive tunnels just beneath the seven, active Amtrak lines serving Boston’s South Station and the financial district, and through what has been described as “…the most difficult soil conditions imaginable,” is acknowledged as the most demanding component of the overall Central Artery/ Tunnel Project. The jacked tunnel method was selected to allow full rail service to the station during tunnel construction.
The soil profile through which tunneling would take place included 20 ft. of historic fill containing building debris, granite seawalls, piles, wharf structures, and abandoned brick structures. This was underlain by soft, organic material and a marine deposit of Boston Blue Clay. Groundwater was encountered approximately 10 ft. below ground surface.


The ground-freezing program was designed by Moretrench to provide multiple geotechnical functions including groundwater cut-off, encapsulation of the fill debris within a matrix of frozen ground, and improvement in the strength of the organics and marine clay along the tunnel alignment.


The freeze system was composed of:


Accurate spacing and freeze pipe location was critical to the success of the stabilization program. Finite element modeling was performed to determine the transient heat flow from the ground to the freeze pipes in order to evaluate freeze pipe disposition, freeze formation period, and freeze plant capacity. With the majority of the excavation work undertaken in the Boston Blue Clay, which also required the greatest refrigeration effort, all design work and detailed thermal analyses were focused on this stratum.

Freeze pipe installation was accomplished from the rail tracks using sonic drilling techniques. Highly maneuverable, high-rail mounted equipment was utilized to precisely locate the pipes among the complex track switchgear, and the sonic drill head could readily penetrate many of the obstructions. This was invaluable in allowing the contractor to maintain the required pipe configuration.
Chilled brine was circulated through the freeze pipe system for three to four months prior to tunnel jacking. A computerized instrumentation system, also designed by the ground-freezing contractor, was installed and remotely monitored to ensure frozen ground conditions prior to the start of tunneling.
The ground-freezing program provided a stable and predictable, completely unsupported, 80 ft. wide by 40 ft. high vertical face that allowed the use of an open-faced tunnel shield.
The tunnel was jacked in place without incident, or without disruption to rail service, and the use of ground freezing was estimated to have resulted in a multi-million dollar saving. Ground freezing was utilized for all three tunnel sections. 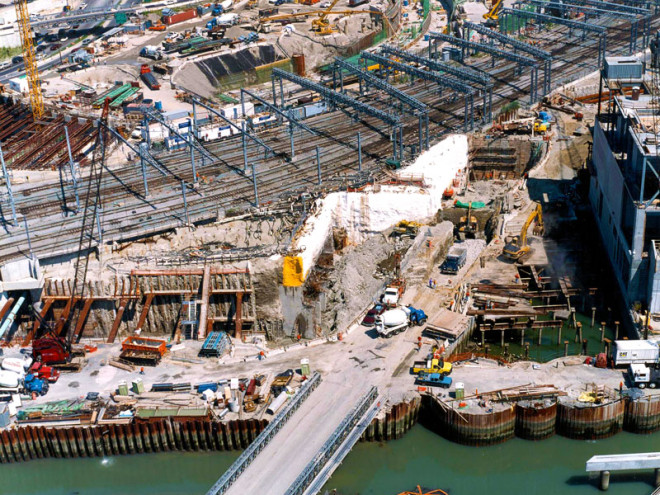